The eFileManager system allows a maximum file size of 35 MBs for all documents in a submission. Therefore, FileTime prevents you from completing the upload of any document that causes your file size total to exceed 35 MBs. No single document can exceed 25MB.

FileTime Displays for you the total file size of documents you have already uploaded for the submission. In Figure 1 you see that the total is 14.68 MBs.

Generally, exceeding the file size limitation only happens with scanned documents as they are much larger than word processor documents that are converted directly to PDF files.

If you receive a warning from FileTime that the document you are attempting to upload will cause you to exceed 35 MBs you have two options:

1. Reduce the size of the document(s)

Start trying to reduce the file size. There are two things you can check to make sure that you are creating the smallest possible file size for your scanned document(s:

A. You Have Multiple Files to Submit and they are all less than 35 MBs each

If your submission consists of one, or more filing, with multiple documents, the easiest solution is to make two or more submissions containing documents that do not exceed the 35 MB limit per submission.

For example, suppose you are submitting two filings in a submission for a case and there are 3 documents with a total file size of 40 MBs. Filing1 contains one document 10 MBs in size and Filing2 contains two documents containing a total of 30 MBs. Submit Filing1 as a submission and Filing2 as a new submission. Use the general guidelines in B below regarding the cover letter and the submission process.

B. At least one of your files is larger than 35 MBs

You need to split it to two or more separate documents so that each part does not exceed 35 MBs. If you have a software program like Adobe Acrobat Standard or Professional, you can do this within the document. If you do not have this option you need to physically separate the pages of the document, rescan them and name then something like Exhibit A - Part 1, Exhibit A - Part 2, etc.

You will then have to file each part in a separate submission. On each of the subsequent submissions contains the remnants of the original document:

She then began the first filing and the uploaded documents resembled Figure 2. 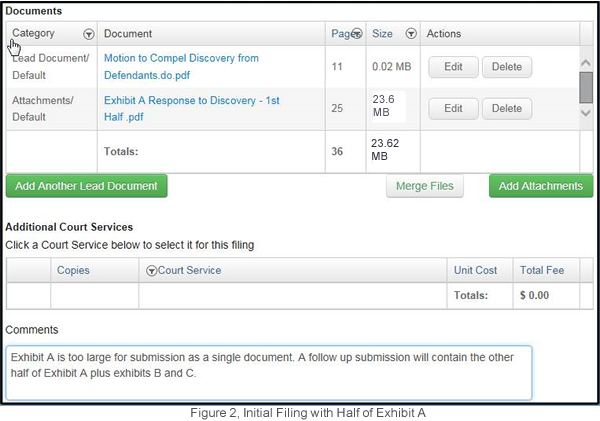 After she completed the initial submission she noted the Submission ID number and entered it into her cover letter for the Envelope Number.

She then started the second submission to file the second half of Exhibit A plus Exhibits B and C. 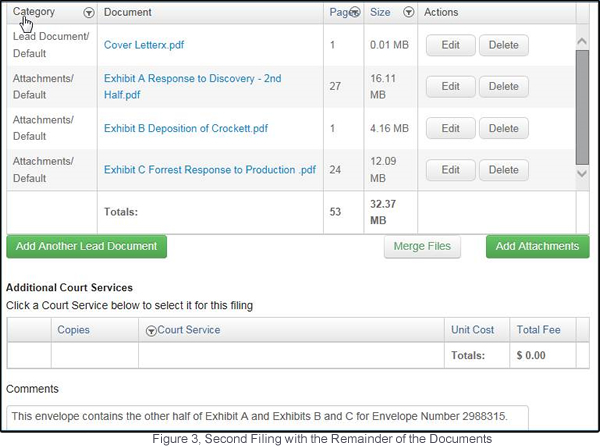 She chose No Fee Filing as the Filing Code for the follow up filings.

If the jurisdiction was one that does not allow attachments, she would have uploaded each segment of the document as a lead document.

Note the comments to the clerk in the Comments field.

The above are general suggestions should work in most jurisdictions but each has its own requirements. The safest choice, if you do not want to risk doing all that work only to have the submission(s) rejected is to call the clerk of court for the jurisdiction and ask for instructions.

We have made changes to increase our security and have reset your password.